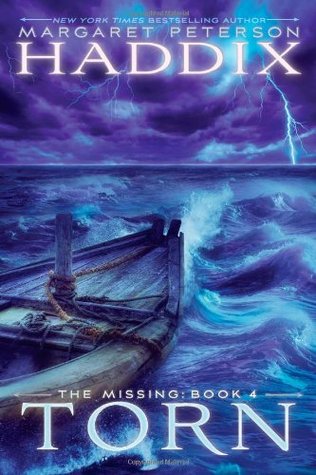 Warning!  Torn is the fourth book in Margaret Peterson Haddix’s The Missing series.  To have any hope of understanding this book, you need to read the first three:  Found, Sent, and Sabotaged.

In this series, Haddix combines elements of historical fiction and time travel.  In essence, the series revolves around the missing children from history and the struggle to return them to their places and “fix time.”  We were introduced to this story line in Found; in Sent, we traveled to England in the time of Richard III; in Sabotaged, we journeyed to the lost Jamestown colony with Virginia Dare; and in Torn, we make our way to the icy waters around northern Canada with the notable explorer Henry Hudson.

Like the previous books, Jonah and Katherine are trying to fix time and get back home.  This time, Jonah must pretend to be John Hudson, Henry’s son, and Katherine has to become invisible.  After all, they’re aboard a ship filled with less-than-pleasant sailors, and a girl on the ship would be considered odd, to say the least.  As Jonah and Katherine struggle to make sense of things in 1611, they’re also trying to figure out why and how time is being manipulated in the first place.  Can they fix things in this time, rescue their friends stuck in 1600, and return home without making a total mess of things?  I’ll leave that for you to figure out when you read Torn by Margaret Peterson Haddix.

If you like mysteries, time travel, and historical fiction, you might want to give The Missing series a try.  For more information on the series and author Margaret Peterson Haddix, visit http://www.haddixbooks.com/home.html.

In Sabotaged, Jonah and his sister, Katherine, are once again trying to fix time.  This go-round, they’re attempting to help Andrea, one of the missing children from history, get back to her original time to fix whatever needs fixing.  And who is Andrea, you ask?  She’s really Virginia Dare, presumably the first child born in the Americas to English parents in the “lost colony” at Roanoke Island.

Jonah, Katherine, Andrea/Virginia, and a dog named Dare begin their journey back in time with the help of their guide, JB.  Almost immediately, however, things begin to go wrong.  Their only source of communication with JB disappears, they seem to land in the wrong place and time, and things are just not going the way they’re supposed to.  What has happened?  How can they get back to the 21st century?  What are they supposed to do?

As events unfold, it becomes clearer and clearer that JB may not be the one “guiding” Jonah, Katherine, and Andrea/Virginia.  There is a more sinister plot afoot, a plot that could impact the flow of history.  Who has sabotaged this mission?  Does JB know anything about it?  If not, how can Jonah and the gang possibly get out of this predicament?  Read Sabotaged by Margaret Peterson Haddix to find out.

The author’s note at the end of the book shed a lot of light on the subject matter of Virgiana Dare and the Roanoke colony.  (I probably should have read this first.)  Haddix really did her research on Virginia Dare, the Roanoke colony, and early settlements in North America.

The fourth book in this series, Torn, is already out, and it is on my “to-read” list (which is about two miles long at this point).  I hope to read it soon.

For more information on The Missing series by Margaret Peterson Haddix, visit http://www.haddixbooks.com/home.html.

If you haven’t read Found, the first book in Margaret Peterson Haddix’s The Missing series, skip this post.  This is one series where you must read the first book to understand the second (and so forth).  Proceed at your own risk!

Sent is the second book in The Missing series by Margaret Peterson Haddix.  The entire concept of time travel mixed with famous missing children throughout history is an interesting one, and I think Found did an awesome job of leading readers into this series.

In Sent, Jonah, Katherine, Chip, and Alex are sent back to fifteenth century England.  Why, you ask?  Well, as it turns out, Chip and Alex are really Edward V, future king of England, and his brother, Prince Richard.  The two boys were stolen from this time just before their uncle, Richard III, ascended to the throne.  Why did their uncle become king instead of Edward?  Why does no one know what really happened to Edward/Chip and Richard/Alex?  It’s up to Jonah and crew to find out and make things right before it’s too late.  Can they do it without screwing up history?  I’ll leave that for you to discover.

I don’t really know what more I can say about this book without giving everything away, so I’ll keep this post short.  I will say that I spent a lot of my time reading this book in a state of confusion.  Keeping track of Edward/Chip and Richard/Alex was mind-numbing, and I’m sure I’ll experience the same thing throughout the rest of the series.

For more information on The Missing series by Margaret Peterson Haddix, visit http://www.haddixbooks.com/home.html. 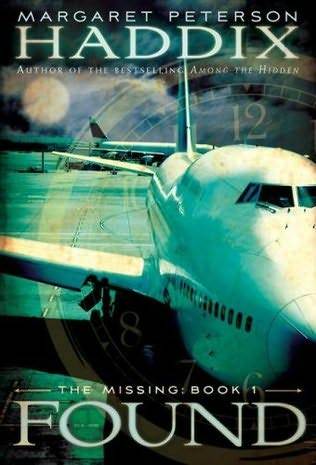 Those are the words an eyewitness used to describe the mysterious plane that appeared at an Ohio airport thirteen years ago.  The plane just appeared at the gate.  There was no pilot.  There were no flight attendants.  There were no adults on board at all.  Just babies.  Thirty-six babies.  No one really knew how they got there or how a plane could just appear, seemingly out of thin air.

Jonah has always known he was adopted.  His parents never kept it a secret from him.  He knows nothing about his birth parents or his life before the adoption.  But someone does.  One day, Jonah receives a letter in the mail–no return address–that says, “You are one of the missing.”  Jonah doesn’t really know what it means, but when his new friend Chip, who is also adopted, receives one of these letters, Jonah begins to wonder if the letters are somehow connected to their adoptions.

Jonah, Chip, and Katherine, Jonah’s sister, begin investigating the mystery surrounding them, especially when a second letter is received that states, “Beware!  They’re coming back to get you.”  Who’s “they?”  Where are they coming from, and where do they plan to take Jonah and Chip?  Are they going to take anyone else?

As the mystery unfolds, it becomes clear (sort of) that Jonah, Chip, and many others, are part of something they knew nothing about.  A battle that spreads across time itself.  What does this mean?  Can they ever return to their boring, normal lives?  What is so special about them?  Begin unraveling the mystery when you read Found by Margaret Peterson Haddix.

Found is just the first book in The Missing series.  The second, third, and fourth books in this seriesare now available as well.  The second book is Sent, the third is Sabotaged, and the fourth is Torn.  These books are available in the Fork Shoals Library, and I have already read the Sent and Sabotaged.  I’ll post the reviews for these two books soon.  I plan to read Torn in the near future, and I’ll post my review on that book as well.  Even though books dealing with time travel kind of mess with my head, I do enjoy this series, and I’m eager to see where (and when) the main characters finally end up.

To find out more about The Missing and Margaret Peterson Haddix, visit http://www.haddixbooks.com/home.html.