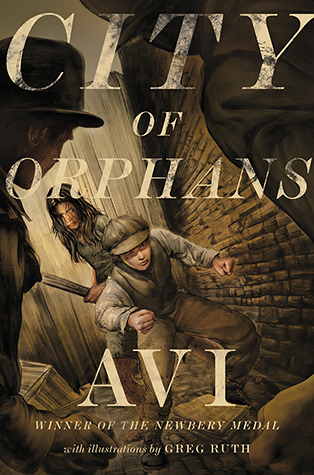 It’s 1893, and New York City is teeming with people–immigrants, crooks, cops, and, most of all, kids. Kids just trying to survive, trying to make a few cents to help their families. One of these kids is Maks Geless. Maks is a newsie. (He sells newspapers on street corners.)

One night, Maks runs into some trouble on his way home from work. Trouble by the name of Bruno and the Plug Ugly Gang. Maks is sure he’s dead meat…until a dirty, homeless girl with a big stick saves him. This girl, Willa, has lived in the streets for months, and Maks figures the least he can do is give her a place to stay for coming to his rescue. So Maks takes Willa home to stay with his family.

Maks’ family, immigrants from Denmark, lives in a tenement, nearly ten people crammed into one small apartment, but it’s home, and they’re all together…until Maks’ older sister Emma is arrested! Maks is sure that Emma must be innocent. There’s simply no way she could have stolen a watch from someone at the new, fancy Waldorf hotel where she works. Maks’ parents are unfamiliar with the way things really work in America, so it’s up to Maks–and his new friend Willa–to figure out just what happened with Emma and the case of the stolen watch.

All the while, Maks and Willa have to watch out for the scary Bruno and this gang, just waiting to terrorize them and take their meager earnings. Can these two kids save their own necks while trying to get Maks’ sister out of jail? And is anyone willing to help two poor kids–who have no money–without expecting something in return? What will these two junior detectives discover in their quest for the truth? The answers will shock even them and will have the power to turn their worlds upside down. Learn how two kids navigate the perilous waters of turn-of-the-century New York when you read City of Orphans by Avi!

This book is nominated for the 2013-14 South Carolina Children’s and Junior Book Awards.