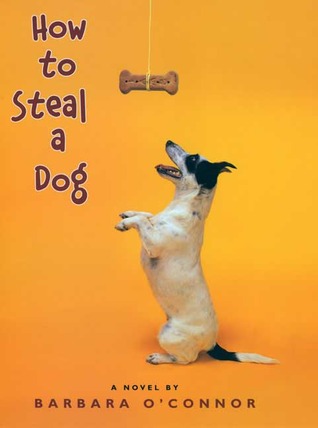 Georgina Hayes needs to find a way to make some quick money. Her dad left Georgina, her mom, and her little brother with almost nothing, and they’ve been living in their car for way too long. They need a home, but Georgina’s mom is working two jobs and still struggling to make the money needed to make a deposit on a house or apartment. Georgina knows there’s got to be a way to help her mom, but what is this young girl supposed to do?

Well, after seeing a reward poster for a missing dog, Georgina gets the bright idea to steal a dog. But it can’t be just any dog. It has to be a quiet, friendly dog. A dog that is loved by its owner. A dog that someone would pay a lot of money to get back.

Georgina writes down her dog-theft plan in her notebook, and, with the help of her little brother Toby, she puts her plan into action. She finds the perfect dog, nabs him, and waits for the reward posters to go up. But nothing really happens the way Georgina wants it to. She feels guilty about what she’s done, and the dog’s owner may not have enough money for a big reward. This sticky situation is quickly spiraling out of control, and Georgina doesn’t know which way to turn.

Can Georgina turn things around and get the money she and her family need? Will she do the right thing, or will she see her dognapping through to the bitter end? What will happen to make Georgina face all the wrongs in her life and do what she must to make things right? Read How to Steal a Dog by Barbara O’Connor to find out!

I recently read Lemony Snicket’s latest book,Who Could That Be at This Hour?, the first volume in the new All the Wrong Questions series.  The writing is kind of standard Lemony Snicket fare–it feels like the author is talking directly to the reader, and there’s quite a bit of sarcasm and understated humor involved. The main character’s voice–in this case, Lemony Snicket himself–is very distinctive and engaging.  The story itself also captivates the reader.  At its core, it is a mystery, but I must admit that nothing is really solved in this book.  In fact, so much remains hidden at the end, that the reader absolutely MUST read the next book, or he/she will remain in a state of confusion for the foreseeable future.

Who Could That Be at This Hour? follows a young Lemony Snicket and his mentor, S. Theodora Markson (we don’t know what the S stands for), as they attempt to solve a mystery in a nearly abandoned town, Stain’d-by-the-Sea (which is not “by the sea”).  It is unclear just what Lemony is supposed to learn from Ms. Markson, but it is abundantly clear that he knows much more–about everything–than his mentor.  He figures out pretty quickly that all is not what it seems to be when it comes to this mystery, but he can’t put his finger on what’s going on or what he can do to solve this case.  Maybe he’s asking the wrong questions…

Lemony Snicket’s own past is also a prevalent mystery in this book.  Where are his parents?  Why is he an apprentice to Theodora?  Who–or what–did he leave behind when he ventured on his current quest?  What is his end-game?

In any case, this book is a mystery wrapped in an enigma, and readers will spend the entire book wondering what in the world is going on.  Who is the true owner of the object–a rather unimpressive Bombinating Beast statue–that Lemony and Theodora are trying to recover?  Who really hired them in the first place?  Well, that may be kind of complicated, and, even though some questions may be answered in this book, they’re probably the wrong ones.  Readers will have to stay tuned to learn more about Theodora, Stain’d-by-the-Sea, the Bombinating Beast, and what’s really going on with young Lemony Snicket.