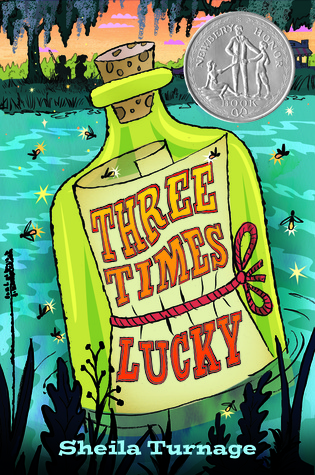 Eleven years ago, Moses “Mo” LoBeau washed ashore in Tupelo’s Landing, North Carolina. This child, who was washed away from her Upstream Mother in a hurricane, was rescued by the memory-impaired, cantankerous Colonel and Miss Lana, and the three of them made a life for themselves in this small coastal town.

Now, eleven years later, Mo is a rising sixth grader who works part-time in the restaurant run by the Colonel and Miss Lana. (Her specialty seems to be peanut butter on Wonder Bread.) She spends most of her spare time researching who and where her Upstream Mother might be, and she enjoys hanging out with her best friend, Dale Earnhardt Johnson III. (The “III” is for the iconic #3 car of his namesake.)

This summer, however, things are being stirred up in Tupelo’s Landing, and Mo takes it upon herself to figure out what’s going on. One of the restaurant’s customers has been killed, a cop is asking questions about Mo’s beloved Colonel, and strange things are afoot in the town Mo calls home. What else is a precocious girl to do? Mo and Dale open up their own detective agency–Desperado Detectives–and begin investigating the crime.

What these junior detectives find, though, may just change everything they know about the people they’re closest to. What secrets are hiding in Tupelo’s Landing? And how can Mo and Dale discover the truth when the police can’t?

As Mo and Dale come closer and closer to solving the biggest mystery to hit Tupelo’s Landing since Mo herself washed ashore, they’ll learn just what family and friendship really mean. When waters get rough, it becomes clear who’ll be there for them, and even Mo might be surprised by who has her back. Join Mo LoBeau on her journey to the truth when you read Three Times Lucky by Sheila Turnage, a nominee for the 2013-14 South Carolina Children’s Book Award!