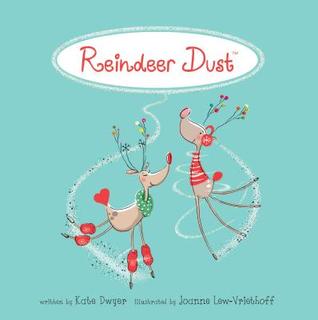 During one particularly foggy Christmas Eve, Santa and his reindeer were busier than ever. So busy, in fact, that the reindeer didn’t get any food before their big night! They were also having problems delivering toys because they couldn’t see to land the sleigh. They looked and looked for the houses they knew were below, but Santa and his trusty reindeer just didn’t know what to do.

Down below, a young boy named William, worried about the fog and what it could mean for Christmas, came up with a plan to help the reindeer. He made some Reindeer Dust! Made of oats, bran, and brown sugar, this sparkly concoction would surely be seen by Santa and his magical (and hungry) reindeer. William shared his wonderful mixture with the children nearby, and after sprinkling the Reindeer Dust on the ground and affirming their believe in Santa’s magic, the children went to bed with hope in their hearts.

Thanks to William and his quick thinking, the reindeer above made their way to the paths illuminated by the Reindeer Dust. Christmas was saved, and the children were filled with delight on Christmas morning, knowing that they had done their part in making this holiday all it should be.

Reindeer Dust, written by Kate Dwyer and illustrated by Joanne Lew-Vriethoff, is a welcome addition to the many books shared with families during the holiday season. It includes a poem to be read on Christmas Eve as well as an easy recipe for Reindeer Dust. The recipe alone is enough to ensure that this book earns its place in many families’ holiday traditions. (I know my nieces will love making–and sampling–the stuff!) It may also be a fun activity for those last days of school before winter break. Little readers would have something to take home and share with their loved ones, and the joy inspired by this charming book would spread far and wide!

Pie by Sarah Weeks is a nominee for the 2013-14 South Carolina Children’s Book Award. This was a really fast, easy read, but it pulled at my heartstrings a little bit…and it made me really want some pie. It also contained a bit of a mystery that readers will be as eager to unravel as Alice, our totally relatable main character, was. Technically, Pie is a work of historical fiction (it takes place in 1955), but it doesn’t really read that way. In my opinion, this book is totally accessible to all readers, and almost everyone will be able to find something they can identify with.

Alice Anderson’s world is turned upside down when her beloved aunt, Polly Portman, passes away suddenly. To everyone else, Polly was the Pie Queen of Ipswitch, but Alice thought of Polly as her best friend in the entire world. She doesn’t really care how much everyone else missed Polly’s pies. Alice simply misses her Aunt Polly…until something happens that puts Alice–and her aunt’s cat Lardo–into the center of a mystery.

It seems that Aunt Polly’s highly coveted pie crust recipe was left to Lardo in her will. And Lardo was left in the care of Alice. Why would Polly–a very smart and not at all crazy woman–leave her prized recipe to her cat? How did she even do this? Of course, everyone is curious about this, but Alice is starting to think that someone is curious enough to commit crimes–like burglary and catnapping–to somehow get greedy hands on this recipe that her aunt valued so much.

Alice tries to take her concerns to her parents and even the police, but no one (except her friend Charlie) believes her. So Alice and Charlie do some investigating of their own. Suspects abound, especially since everyone seems determined to take Aunt Polly’s place as the Pie Queen of Ipswitch. It’s up to Alice to figure out who the real culprit is. Will she be able to solve the mystery? And what will she learn about herself along the way? Read Pie, a sweet mystery by Sarah Weeks, to find out!

With each chapter starting with a delectable pie recipe, I plan to really market this book to my students who frequently check out cookbooks. (A lot of kids are into cooking. Who knew?) This is a really sweet (pun intended) book that, yes, does contain a bit of a mystery, but also explores the bonds of family and friendship. It also teaches an important lesson about using one’s own talents and not worrying about what someone else may be good at or the recognition they may receive (a message that even I needed).