The Romeo and Juliet Code introduces readers to Felicity Bathburn Budwig, a young  British girl who is moving to Maine to stay with relatives for the duration of World War II.  Her parents leave her with family members she’s never met, and Felicity doesn’t really know where her parents are going or when–or if–they will return for her.  They don’t even write to her…but they do send letters to her Uncle Gideon.  Felicity is barely allowed to touch these letters.  That, of course, makes her want to know what the letters are hiding.

With the help of Derek, a boy who lives with the Bathburn family, Felicity learns that these mysterious letters are codes being sent from her parents.  But what do they say?  What is the code’s connection to Romeo and Juliet?  Do the codes have anything to do with the war that is sure to involve America at any moment?  Just what are her parents involved in?  And can Felicity and Derek figure everything out–including the mystery surrounding the turmoil in the Bathburn family–before they lose their minds?  Discover the truth when you read The Romeo and Juliet Code by Phoebe Stone.

While this book is a decent historical mystery with a dash of young love, it wasn’t exactly a quick read, and that–along with the misleading cover–will make this one a hard sell.  I know some of my female students will pick up the book because of the current cover, but the “bait and switch” here might turn them off once they start reading.  Most of my male students won’t pick up this book at all because the cover makes it look like a “girl book.”

If you’d like more information about The Romeo and Juliet Code and other books by author Phoebe Stone, visit http://www.phoebestone.com/.

If there is a perfect summer read for kids who just finished the fifth grade, Cheesie Mack Is Cool in a Duel, written by Steve Cotler and illustrated by Adam McCauley, might just be it.  As a matter of fact, this is an excellent summer read for kids of all ages, especially those of us who have ever been to summer camp!  Everything that made Cheesie Mack Is Not a Genius or Anything a great read also holds true for this sequel.  Cheesie’s voice is delightful and laugh-out-loud hilarious, and I know my students will love this book as much as they are currently eating up the first one (which is nominated for the 2012-13 South Carolina Children’s Book Award).

In Cheesie Mack Is Cool in a Duel, readers follow Cheesie, his best friend Georgie, and a whole cast of characters to Camp Windward (for boys) and Camp Leeward (for girls) in Maine. (Events in this book pick up right where they left off in the first book.  It’s the summer after fifth grade graduation.)  Cheesie is sure that this will be the best summer ever because he and Georgie will be the oldest of the Little Guys at camp. Unfortunately, thanks to events that occurred in the first book, things don’t quite work out the way Cheesie had hoped. Now, Cheesie and Georgie are the youngest in the Big Guys group at camp. (Not a big deal if you’re already kind of big like Georgie, but it’s bad news if you’re already a little guy like Cheesie.)  This presents a whole new set of problems, and the biggest one is probably Kevin Welch, his sister Goon’s boyfriend.

Camp Windward is not off to a stellar start, but Cheesie comes up with a way that might help him to make the best of things.  He challenges Kevin to a Cool Duel.  Whoever is voted the coolest in their cabin at the end of a week is the coolest guy at camp!  Kevin gets out to an early lead, but Cheesie isn’t a quick-witted kid for nothing.  He comes up with a couple of things that are sure to earn him some votes.  But will he get enough votes to win the Cool Duel?  You should definitely read this book to find out!

Even though the Cool Duel is a big part of this book (hence the title), there’s also a lot of other stuff going on:  a dance with the girls from Camp Leeward, sneaking into the computer lab, snakes, a talent show, and the most epic scary story in the known universe.  Cheesie also introduces readers to exciting new words (only a few of which are made up) and questions to ponder.  Cheesie’s website, http://cheesiemack.com/, also plays a big part in this book.  This wonderful site makes this book, like its predecessor, truly interactive.

All in all, Cheesie Mack Is Cool in a Duel is the perfect follow-up to the first book, and I can’t wait to see what Cheesie gets up to next! 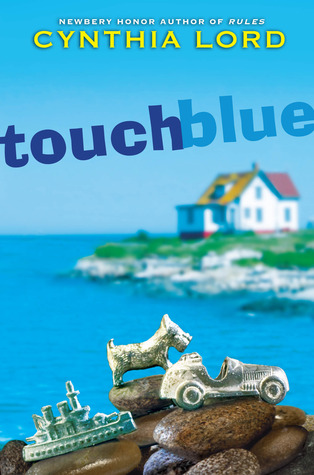 Touch Blue by Cynthia Lord, a nominee for the 2012-13 South Carolina Children’s Book Award, is one of the fastest reads I’ve had in a while.  I finished this book in just a couple of hours.  Despite its length, however, Touch Blue packed an emotional wallop.  The main character, eleven-year-old Tess, has a perfectly realistic voice, and, even though some readers, especially in South Carolina, will be unable to relate to the setting of this book (an island off the coast of Maine), they will find a relatable character in Tess.

In order to keep their island school from closing–and losing many of the island’s inhabitants to the mainland–some of the residents of Bethsaida Island agree to take in foster children to increase enrollment at the school.  Tess’ family is one of those taking in a new kid.

As Tess and her little sister Libby eagerly await the arrival of thirteen-year-old Aaron, Tess is filled with visions of what it will be like to have an older brother.  She’s sure that it will be great, and she’s excited to have someone close to her age around.  She’s not, however, prepared for the emotional baggage that Aaron brings with him.  He’s justifiably moody and unsure of his new surroundings, and he resists all of Tess’ attempts to get closer to him.

Tess tries everything she can think of to help Aaron feel like he belongs, including a few things thought to bring good luck (like touching something blue to make a wish come true).  Gradually, Aaron feels more comfortable on the island–he plays his trumpet in the July 4th celebration, he helps Tess restore her boat, and he goes lobster-trapping with Tess and her Dad–but Tess knows that he’s holding back.  Aaron misses his mom, and he wants to get back to her.  Tess tries to convince Aaron that he belongs with her family, but it may take something drastic to make him believe he’s important to them.

Will Tess be able to help Aaron accept his new life and family, or will all of her wishing leave her with nothing?  Read Touch Blue by Cynthia Lord to find out.

I really enjoyed this book, and I plan to recommend it to all of my students in 3rd through 5th grades.  Middle grade readers may enjoy it as well.  I’m hoping that my students will be interested in the books that Tess alludes to throughout Touch Blue:  The Great Gilly Hopkins by Katherine Paterson, Bud, Not Buddy by Christopher Paul Curtis, and Anne of Green Gables by Lucy Maud Montgomery.  I love how Tess relates her relationship with Aaron to those of the characters in these beloved books.

If you’re looking for a super-fast, moving, and heart-warming summer read, I highly recommend Touch Blue.  At its core, it is a story about what it means to truly belong and how a person creates his or her own luck.  This book is perfect for anyone who’s ever felt like an outsider–and who hasn’t?

For more information on this book and others by Cynthia Lord, visit http://www.cynthialord.com/.