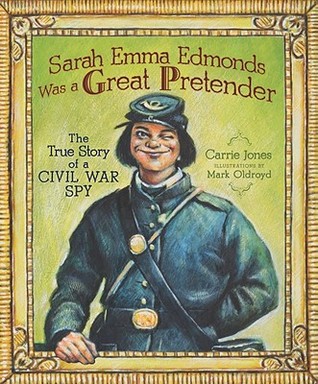 Sarah Emma Edmonds Was a Great Pretender: The True Story of a Civil War Spy, written by Carrie Jones and illustrated by Mark Oldroyd, is a nominee for the 2013-14 South Carolina Picture Book Award.

Until I read this book, the story Sarah Emma Edmonds was unknown to me. I find it fascinating that a woman could go virtually her entire life pretending to be someone else and have no one be the wiser. I appreciate that this book gives young girls (and boys!) yet another heroine to read about. When learning about the Civil War, female heroes are few and far between, so it’s nice to add one more to the lineup!

After Homer P. Figg’s older brother, Harold, is illegally sold to the Union Army, Homer does everything he possibly can to find his brother and bring him back home. But what can a boy–whose only talent is telling fibs–do to rescue his brother before he’s sent off to fight in the Civil War?

Well, as it turns out, there’s a lot that Homer can do. He can get involved in the Underground Railroad, he can travel on a steamship to New York, he can become part of a traveling carnival act, he can be arrested for treason, and he can stand up to people twice his age. But can he find his brother before it is too late? Join Homer P. Figg on his amazing–and mostly true–adventures to find out!

I am not normally a fan of historical fiction, but I really enjoyed this book, partly because the character of Homer was so over-the-top and likable. Yes, he was known to tell the occasional tall tale, but he had a good heart, and all he wanted in life was to be with his brother.  This book also offers readers a glimpse of the Civil War that they may not have considered before.  If you pick up this book, I hope you enjoy it as much as I did.