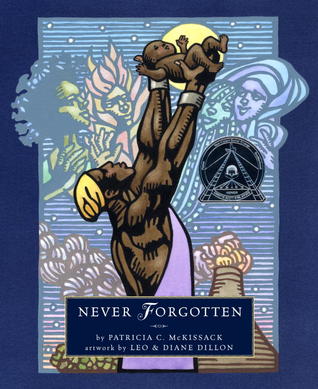 Never Forgotten, written by Patricia C. McKissack and illustrated by Leo and Diane Dillon, is a nominee for the 2013-14 South Carolina Children’s Book Award.

Never Forgotten is a beautiful, poetic book that, in my opinion, fills a void when it comes to studies of slavery. This book of poetry takes a look at the relationship between a man, his son, the elements that were a huge part of their lives as blacksmiths in Africa, and how their lives were impacted by the slave trade.

When the young boy, Musafa, is taken as a slave and forced to cross the ocean in the Middle Passage, the father, Dinga, grieves and looks to the elements–Earth, Fire, Water, and Wind–to help him find his lost son. Each element searches for Musafa, and, while they do see him, they cannot bring him back to his father. They do, however, report to Dinga how Musafa is doing. Dinga is determined that his son never be forgotten.

When Wind gathers the strength to cross the Atlantic (as a hurricane), he learns that Musafa–who now goes by the name of Moses–has not lost the spirit instilled in him by his father, and he’s making a life for himself as a renowned, and soon-to-be free, blacksmith. Dinga, while still missing his son, is filled with joy at this news, and even though the villagers think he’s crazy, Dinga celebrates “the son who was taken but never forgotten.”

The author’s note at the end of this fantastic book gives a little background on the origin of the story. Not much is written about how African parents remembered their sons and daughters who were taken as slaves, so McKissack took what she learned about African history, the slave trade, and Caribbean legends to craft this amazing story. This book may be a work of fiction, but it’s easy to see how real it could be.