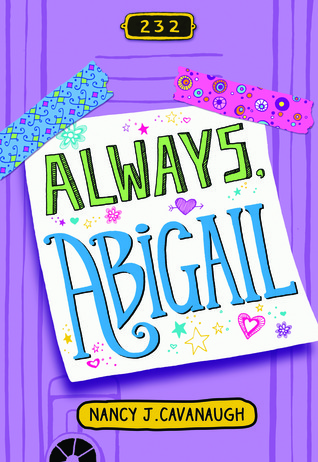 Always, Abigail by Nancy J. Cavanaugh is a nominee for the 2016-17 South Carolina Children’s Book Award.

Told in lists and letters, Always, Abigail is the tale of–you guessed it–Abigail. This young girl is entering sixth grade, and she and her two best friends are obsessed with making the school’s pom-pom squad. Her life will be over if she doesn’t make it. (Anybody recognize the middle school melodrama?) It’s bad enough that she and her BFFs aren’t in the same homeroom and she’s been saddled with the school loser for a year-long project. Surely the universe wouldn’t take poms from her too?!

As you may have guessed, Abigail doesn’t make the pom-pom squad. She is devastated and doesn’t really know what to do anymore. Her friends are always busy and now have inside jokes that she’s not privy to. Abigail is feeling left out, bored, and depressed, and she’s not sure how to change things. Her partner for her class’ “Friendly Letter Assignment” doesn’t help matters.

Gabby Marco is the outcast of the sixth grade, and she’s Abigail’s letter partner. At first, Abigail wants absolutely nothing to do with Gabby, but, as Abigail’s friends drift away, she and Gabby form an unlikely friendship. The two girls learn more about each other and realize they have more in common than they thought.

But Gabby is still an outcast, and Abigail’s so-called “friends” delight in tormenting this girl, not knowing anything about what she’s going through at home. But Abigail knows…and she stays silent. She knows she should stand up for Gabby, but she doesn’t want to risk becoming an outcast herself. Abigail is sick about the entire situation, and she feels like she’s about to explode.

When Abigail’s luck looks like it’s starting to change, she’ll be forced to make some truly difficult decisions. Will she continue to go along with the crowd, or will she stand up for a friend who’s been nothing but kind to her…even if it means losing all she’s ever wanted? Find out when you read Always, Abigail by Nancy J. Cavanaugh.