Skip to content
HomeCharlie Bumpers vs. the Teacher of the Year 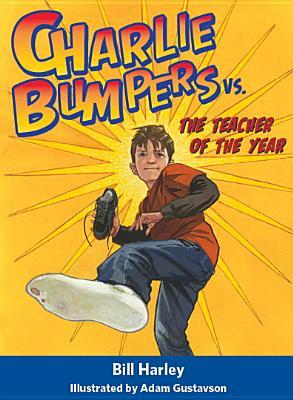 Charlie Bumpers vs. the Teacher of the Year, written by Bill Harley and illustrated by Adam Gustavson, is a nominee for the 2015-16 South Carolina Children’s Book Award.

Charlie Bumpers should be excited about going into the fourth grade. He would be…if his teacher were anyone but Mrs. Burke. Charlie has history with Mrs. Burke, so he’s sure that she’s going to make his life absolutely miserable. And he doesn’t care that she’s the Teacher of the Year. Charlie didn’t vote for her.

At first, it seems that Charlie may be right about his new teacher. Mrs. Burke really does appear to have it in for Charlie Bumpers. It doesn’t help that Charlie always finds himself in the middle of trouble. (He doesn’t mean to get into these messes, really! They just kind of happen.)

Charlie hopes that his entire fourth grade year won’t be horrible, but how can he get things on the right track when Mrs. Burke is always waiting on him to mess up? Can he turn things around? Is Mrs. Burke really all that bad? Find out how Charlie comes to terms with Mrs. Burke when you read Charlie Bumpers vs. the Teacher of the Year!

I think this book would be an excellent read-aloud for upper elementary classrooms, especially fourth grade. It’s both funny and relatable, and I think kids will really enjoy it. Also, it’s the first book in a new series, and many students are always game for a cool new series (especially young readers who either really like or are a little tired of Diary of a Wimpy Kid).