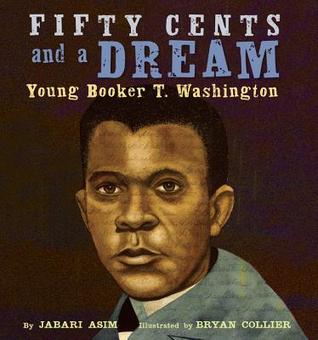 Fifty Cents and a Dream is an inspiring story about a young Booker T. Washington. It introduces young readers to this important figure, his early life as a slave, a worker in salt mines, his first days in school, and, eventually, a young man who journeys hundreds of miles just for the chance to go to college. He finally arrives–with only fifty cents in his pocket. Even then, he must work day and night to make his dream a reality.

This book shines a light on the power of words, dreams, and persistence. Booker T. Washington never gave up on his dreams of becoming an educated man, even when it would have been easier to quit. He persevered and became not only a college graduate but also a writer, professor, and leader. He founded the Tuskegee Institute and paved the way for many young men and women who would come after him.

In addition to being an excellent book to use in Black History Month celebrations, I think Fifty Cents and a Dream is a fine addition to any public, classroom, school, or personal library. It shows readers the power of dreams, but it does emphasize that those dreams won’t become a reality without a great deal of hard work and commitment.