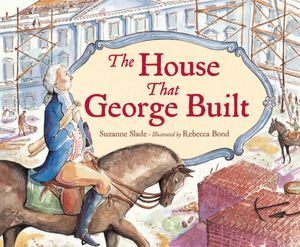 The House That George Built, written by Suzanne Slade and illustrated by Rebecca Bond, is a nominee for the 14-15 South Carolina Picture Book Award.

If you take the familiar story of “The House That Jack Built” and combine it with the history of America’s most famous home, you’ve got The House That George Built. This book tells readers about the building of the White House, and how George Washington, the only president who never actually lived in the house, oversaw its construction.

The House That George Built takes us through the early days of our nation, the selection of site for the president’s home, choosing a design, and into the actual building of what would become the White House. The explanations of those events are coupled with charming rhymes reminiscent of the familiar poem mentioned above.

Readers see that, even though he held the highest office in the country, George Washington didn’t hesitate to lend a hand wherever it was needed. He assisted with the actual design, he pounded in stakes, and he made important decisions so that the house would be finished on time and budget.

An afterword and author’s note provide more information about the building of the White House, including some of the changes that have been made over the years.

This book is an ideal fit for studies of Washington, DC, George Washington, or even architecture. It could also be used as a read-aloud for Presidents’ Day. In any event, The House That George Built is a welcome addition to any library collection, and I think both students and teachers who read this book will have a new appreciation for the White House and the man ultimately responsible for building it.