Skip to content
HomeThe President’s Stuck in the Bathtub 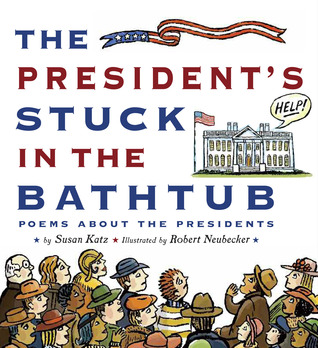 The President’s Stuck in the Bathtub: Poems About the Presidents, written by Susan Katz and illustrated by Robert Neubecker, is nominated for the 2013-14 South Carolina Children’s Book Award.

I found the poems about each president in this book to be very informative and, in several cases, funny. The notes explaining each poem’s content were also extremely helpful.

The cartoon-like illustrations were often humorous and depicted each U.S. President in a less-than-serious light. Most people view these leaders as super-serious, straight-laced politicians, but we often forget that presidents are also people. The poems in this book kind of highlight that and may even give students something to relate or even aspire to.

I will say that I was a bit disappointed with the poem for my favorite president, Theodore Roosevelt. It was all about one of his sons and didn’t even begin to touch on how awesome TR really was.

The notes on each president at the back of the book also provide readers with information. Each president is listed in order with his full name, birth and death (where applicable) dates, terms of office, nicknames, most notable quote, and a first for each man. Teddy Roosevelt, for example, was the first president to ride in an automobile, submerge in a submarine, and fly in an airplane. These little tidbits are kind of cool and could prove very useful in trivia contests!

This book of poems is a welcome addition to my library, and I foresee it becoming an integral part of Presidents’ Day celebrations.